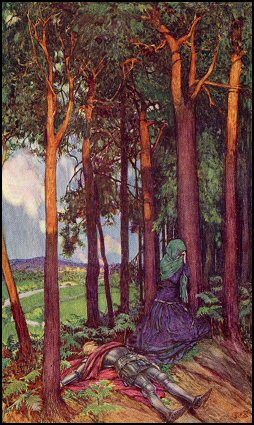 
Count back twelve generations, and each of us has about four thousand ancestors. The only one of mine that I can lay a name to is one John Rutherford of Knowe in Roxburghshire near the English-Scottish border, who subscribed solemn assurances in the year of grace 1553 that he would uphold "the gude peace" of Scotland and of England. They made him swear it again a few years later for good measure, but I suspect it still didn't take.

"The Borders" is the desolate region on either side of the Tweed and Hadrian's Wall; in the centuries leading up to the Union of England and Scotland it was a morass of reiving and rustling, blood-feud and butchery, rough justice and rougher vengeance. It was also the cradle of the Border Ballad, as often as not telling the exploits of some outlaw like Johnie Armstrong or Kinmont Willie.

There is a school of Border writers who may be called the romantics. The first of these is the greatest man the region ever produced, Sir Walter Scott. It is not too much to say that Scott made the legendary Border as most people vaguely understand it; a land of brave men and daring deeds, of gothic mystery and fairytale beauty, of gallant Scot and sturdy Saxon, of high ideals and sweet dreams clothed in ballads that are the very heart of a nation's poetry. All perfectly true in its own way, but not the whole story. Scott knew the other side as well, the blood and the terror and the cruelty and the crime... [The Steel Bonnets]

The One Essential Reference

The Steel Bonnets: The Story of the Anglo-Scottish Border Reivers by George Macdonald Fraser [HarperCollins trade paperback ISBN: 0002727463].
To get a proper handle on the Borders in the sixteenth century, you need The Steel Bonnets. Macdonald writes history with the rollicking pace of his swashbucklers, and provides an even-handed, clear-eyed look at the world of hot trods and March treason. Here is the background to the Scott-Kerr feud, the songs of Kinmont Willie Armstrong, and the double-dealing of John Maxwell, 4th Lord Herries.

Historical outlaw Border Ballads, some with commentary on the legends behind them:

About Sir Walter Scott's Minstrelsy of the Scottish Borders. "Scott originally intended to concentrate on ballads celebrating historical incidents, particularly those connected with the old Border raids, but the first two-volume edition of the Minstrelsy, which appeared on February 24, 1802, eventually contained twenty-nine historical pieces and twenty-four romantic ballads, together with a handful of 'imitations' mostly by Scott himself." From Edinburgh University. New ! Minstrelsy of the Scottish Borders online at Electric Scotland. New ! Sir Walter Scott and the Border Minstrelsy by Andrew Lang (Project Gutenberg). "It is a common, cheap, and ignorant scepticism that disbelieves in the existence, in Scott's day, or in ours, of persons who know and can recite variants of our traditional ballads..." New ! Border Ballads, with texts fron Child and Scott's Minstrelsy, classified as ballads of the West Marches, ballads of the Middle Marches, and supernatural ballads. "Very much a work in progress." New ! Three Border Ballads from Motherwell's Minstrelsy, Bishop Percy's Reliques, and the Glenriddel MS, at the Clan Johnstone site. New!

The Lymond Chronicles. The shifting political winds of the Borders in the mid-sixteenth century form much of the background to Dorothy Dunnett's phenomenally popular series The Lymond Chronicles, set in Scotland, England, France, Malta, the Levant and Russia, but returning again and again to the Borders. Vintage has brought the six volumes of Lymond's adventures back into print in the US, in a lovely matched trade paperback edition, indifferently photoreproduced from the British hardcovers. Vintage maintains a Dorothy Dunnett page, where you can read a letter by Dunnett on the origins of the Lymond novels. Bill Marshall, of the James Thin, the lamented Edinburgh booksellers, maintains the Dorothy Dunnett page in the UK. George Macdonald Fraser wrote the screenplays for the Richard Lester films The Three Musketeers, The Four Musketeers, and Return of the Musketeers. He is the author of The Pyrates, starring Calico Jack Rackham and others of that salty brotherhood, and of the Flashman novels (the best-known of these is a cynical Ruritanian adventure, Royal Flash, also filmed by Richard Lester). For more information, visit The Royal Flashman Society of Upper Canada and read The Flashman Papers Project. George Macdonald Fraser also wrote The Hollywood History of the World : From One Million Years B.C. to Apocalypse Now, a volume sadly out of print. Sir Walter Scott's romantic novels of the Borders online: J. G. Lockhart's Life of Scott is also available online, as are Selected Poems and two selections from Scott's On the Fairies of Popular Superstition, one from Scotland and one from the Isle of Man.

Lochwood Tower (or Lochwood Castle), the seat of the Johnstone Clan, lies a few miles southwest of Moffat in Dumfriesshire, Scotland. It is now a ruin, but you can read a description with a plan of the tower, a photo, and a period sketch at the Lochwood Tower page maintained by Jeffrey M. Johnstone, FSA Scot. New URL. The Clan Johnstone Heritage Page, also maintained by Jeff Johnstone, has even more information about the Borders, including links to Border clan maps, castle photos, and other resources. New URL. In Search of the Border Reivers is the official home of the Reivers Project, devoted to the Borders; if you can't read the front page go directly to the the text version. [Thanks, Jeff!] Albion's Seed: Four British Folkways in America by David Hackett Fischer (Oxford, ISBN: 0195037944 hardcover, ISBN: 0195069056 trade paperback) is one of my favorite books. Albion's Seed Grows in the Cumberland Gap at the University of Virginia uses excerpts from Albion's Seed to illustrate the folk culture of the Borders that was transplanted to the Cumberland Gap area in the eighteenth century; of particular relevance is The Borders of North Britain--an Introduction to Border Culture. Border Wardens enforced the peace on the Borders in the sixteenth century; here are excerpts from The Steel Bonnets and The Border Reivers, The Story of the Anglo-Scottish Borderland by Keith Durham and Angus McBride, edited by Lee Johnson [Reed Consumer Books, 1995] on the role and rule of the Wardens. New URL.
Top · Home · Colophon · Notes on the Illustrations · Site Map
8 May 2005