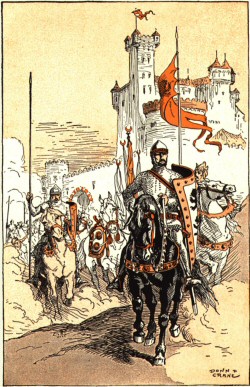 The Song of the Cid (Poema del Cid or Cantar del Mio Cid) is the great epic of medieval Spain. It chronicles the life of Rodrigo (or Ruy) Diáz de Vivar, a commander under King Alfonso VI of Castile in the eleventh century.

Diáz de Vivar fought for Alfonso against the Moors, fought for the Moors against Alfonso, and conquered the Kingdom of Valencia for himself; he ruled there until his death. Even his title, El Cid Campeador, reflects his conflicting loyalities: "El Cid" is a Moorish title of respect, from Arabic al sayyid "Lord"; "Campeador" is Spanish for "Champion".

Like other historical tales whose heroes become the stuff of legends, poems, and ballads, the story of the Cid accreted fantastical details over the centuries. The film El Cid (1961), starring Charlton Heston and Sophia Loren, won three Academy Awards.

There are several sources for the story of the Cid; Robert Southey's 1637 edition entitled The Chronicle of the Cid is based on the Chronica del Famoso Cavallero Cid Ruydiez Campeador (1552 and 1593), La Cronic de Espña, and what he calls Poema del Cid, an anonymous poem (c. 1207) preserved at Vivar; of the latter he says

The poem is to be considered as metrical history, not metrical romance. It was written before those fictions were invented which have been added to the history of the Cid, and which have made some authors discredit what there is not the slightest reason to doubt. I have preferred it to the Chronicles sometimes in point of fact, and always in point of costume; for as the historian of manners, this poet, whose name unfortunately has perished, is the Homer of Spain.

El Cid, a brief biography at the website of Dr. Barbara E. Kurtz, Professor of Spanish, Illinois State University. The Song of The Cid, an introductory essay to the poem and its setting, at the University of Kansas. New URL. Some Thoughts on The Song of the Cid, a contextual essay by Lynn Harry Nelson of Department of History at the University of Kansas. New URL. El Cantar de Mio Cid, in Spanish with parallel English prose translation, at Orbis Latinus. New ! The Chronicle of the Cid, translated by Robert Southey, with extensive notes on the source texts, at the University of Michigan. The Lay of the Cid, the 1919 translation by R. Selden Rose and Leonard Bacon, at the Online Medieval and Classical Library at Berkeley. The Story of the Poem of the Cid with annotations, from National Epics By Kate Milner Rabb, 1896, at Authorama. New ! Le Cid (1637), the play by Pierre Corneille (in French), and another version of Le Cid at ABU: la Bibliothèque Universelle. How my Cid the Campeador won the Favour of his King, from Heroic Legends by Agnes Grozier Herbertson [1908], illustrated by Helen Stratton, at the Kellscraft Studio.

The Library of Iberian Resources Online (LIBRO), a joint project of the American Academy of Research Historians of Medieval Spain and the University of Central Arkansas, presents full-text electronic editions of recent but out-of-print university press monographs on medieval Iberia. These are works in copyright but generously made available over the Web by permission of the copyright holders. Chronology of Medieval Spain at Princeton. The History of Moorish Spain (1035-1139), with a map, part of the Moorish Spain site at CalPoly San Luis Obispo.
Top · Home · Colophon · Notes on the Illustrations · Site Map
13 March 2004