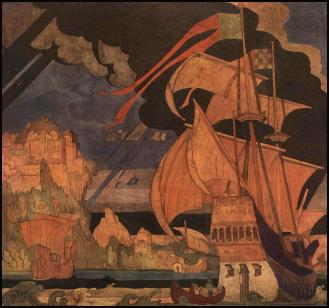 Sir Francis Drake, navigator and privateer, is one of the greatest English sea-captains of all time. Revered as a hero in the fight against the Armada and despised as an upstart by the old nobility, Drake epitomizes the self-made Elizabethan privateer, rapacious in the hunt for treasure (especially Spanish treasure) but daring and visionary in exploration.

Drake and his crew are remembered as the first Englishmen to circumnavigate the globe, claiming a portion of California for Elizabeth along the way. His attack on Cadiz and his devastating raids on the Spanish Main earned him the fear and the grudging respect of the Spaniards, who call him El Draque, "The Dragon".

Drake's exploits are the distant inspiration for the adventures of Captain Geoffrey Thorpe (Errol Flynn) in Michael Curtiz's film The Sea-Hawk, which has nothing but the title in common with the Rafael Sabatini novel of the same name.

In 38 deg.30 min. We fell in with a fit and convenient harbor and June 17, came to anchor there, where we stayed till the 23 July. During all which time, not withstanding it was the height of summer, we were continually visited with nipping cold, neither could we at any time within a fourteen day period find the air so clear as to be able to take height the sun or stars.

[from The World Encompassed]

"Nova Albion" was the name Drake gave to the land he claimed for Elizabeth I on the western coast of North America. In some parts of the Pacific Northwest, the argument over where exactly Drake landed dwarfs the argument over who wrote Shakespeare's plays.

Much of the evidence is based on an inset on Jodocus Hondius's map of Drake's circumnavigation (c. 1596), showing a bay or inlet labeled "Portus Novae Albionis" - Drake's harbor.

The Drake Exploration Society publishes The Drake Broadside, which takes the traditional view and concludes "The Drake Navigators Guild have proved beyond question that Drake sojourned at Drakes Bay [Marin, California] and Estero ... Sir David and Michael Turner have visited the area and are convinced that the Guild have correctly documented Drakeĺs movements in California. History is visited by those who wish to make a name for themselves by re-inventing characters, events and places. Unfortunately this has hindered the universal acceptance of the Guildĺs work which began nearly forty years ago."

Here are some of the dissenting views:

Whalecove, Oregon is proposed as the site of Nova Albion by "amateur British historian" Bob Ward. The Marin County (California) Historical Society web site includes excerpts concerning Nova Albion and the Miwok Indians from The World Encompassed, a record of Drake's voyage published in 1628, written by Drake's nephew (also called Sir Francis). New URL. Cyril Stanley Smith's 1976 Metallurgical Report on "Francis Drake's Brass Plate" at MIT Institute Archives and Special Collections concludes that it "seems unlikely that the plaque could have been produced before the late 19th century." New ! Determination of latitude by Francis Drake on the coast of California in 1579 investigates "where a 16th century determination of "N38D.30.M" at about longitude W123 would have been." New ! Sir Francis Drake in Nova Albion, the Wondjina Research Institute of Sonora, California's Nova Albion Project, focusing on Agate Beach in Bolinas Bay. New !

The World of Sir Francis Drake