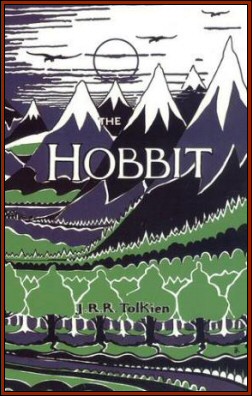 For years, a page on J.R.R. Tolkien (1893-1973) has been part of the vision of Legends; when the idea of a section on Poets & Painters occurred to me in 1998, it was obvious that such a section would be incomplete without the most influential fantasist of the twentieth century, the author of The Hobbit, The Lord of the Rings, and The Silmarillion.

In many ways, this entire site is an exploration of the byways I discovered along (to quote Tom Shippey) "The Road to Middle-earth": the haunting fairy-ballads, the medieval tales of kings and warriors, the Northern Thing, are all tastes I discovered through the The Lord of the Rings and the great explosion of fantasy publishing that followed its appearance in paperback in the late 1960s. Clearly, a page on the master is in order.

But the task is daunting: a search of the web for "Tolkien" returns over half a million pages, more than anyone can survey, let alone assess. Of necessity, this page will be arbitrary and incomplete, the selections influenced by my personal tastes and preoccupations. Think of these links as signposts on that road to Middle-earth; follow them to other sites and other surveys. The Road goes ever on.

There and Back Again

A Biography of J.R.R. Tolkien by David Doughan at the Tolkien Society. J.R.R. Tolkien, an essay written by Brian Rosebury, University of Central Lancashire, at the The Literary Encyclopedia. A Chronological Bibliography of the Writings of J.R.R. Tolkien compiled by Åke Bertenstam. An Illustrated Tolkien Bibliography focuses on British editions; it includes dust-jackets and rare images of small periodicals and private printings. Tolkien.co.uk, maintained by Tolkien's UK publishers HarperCollins, includes a gallery of Tolkien's drawings from the volume J.R.R.Tolkien: Artist and Illustrator, a biography, and interviews. Turgon's Bookshelf: Reading Tolkien beyond The Lord of the Rings offers an introduction to Tolkien's other works; part of TheOneRing.net's Green Books site. Exploring the Diverse Lands of Middle-earth, adapted from The Origins of Tolkien's Middle-earth For Dummies, at Dummies.com. "...Coming to know how much Middle-earth owes to past European sagas, legends, and languages can only enhance appreciation of Tolkien's works and deepen understanding of their many lessons." What's in the History of Middle-earth?, Ninni M. Pettersson's detailed list of the contents of the 12 volumes of Christopher Tolkien's History of Middle-earth and Unfinished Tales, at Mellonath Daeron, the Language Guild of the Forodrim.

Cent o Hedhellem: An Examination of the Elven Tongues offers an excellent introduction to Tolkien's Elvish languages, by Ostadan; also at TheOneRing.net's Green Books site. Resources for Tolkienian Linguistics: An Annotated Guide by Carl Hostetter, at the Elvish Lingusitic Fellowship What Tolkien Really Did with the Sampo by Jonathan B. Himes, a scholarly article exploring Tolkien's reworking of the notion of the sampo of The Kalevala in devising the Silmarils; originally published in Mythlore 22.4 (Spring 2000). The Best Introduction to the Mountains, an essay on Tolkien by World Fantasy Award-winning author Gene Wolfe.

Tom Shippey's J. R. R. Tolkien: Author of the Century and a Look Back at Tolkien Criticism since 1982 by Michael D. C. Drout and Hilary Wynne, at Envoi [PDF]. A Question of Time: J.R.R. Tolkien's Road to Faërie by Verlyn Flieger, reviewed by Douglas A. Anderson (The Annotated Hobbit) at the Mythopoeic Society site. "I have to say that I experienced while reading this book a number of nearly breath-taking illuminations on Tolkien and on how his mind worked. One hardly expects to be convinced of an entirely new approach to understanding parts of The Lord of the Rings via the interweaving of dreams and precognition, but Flieger accomplishes just that."

Beowulf: "The most important essay in the history of Beowulf scholarship, J.R.R. Tolkien's 'Beowulf: The Monsters and the Critics' has, rightly, been much studied and discussed. But scholars of both Beowulf and Tolkien have to this point unaware that Tolkien's essay was a redaction of a much longer and more substantial work, Beowulf and the Critics, which Tolkien wrote in the 1930's and probably delivered as a series of Oxford lectures.

Press coverage that Michael D. C. Drout had "discovered" Tolkien's "lost" translations of Beowulf with annotations at Oxford in 1996 are a bit overhyped (they were in the catalog all along), but Drout did unearth and receive permisson to edit Tolkien's Beowulf and the Critics, issued by Arizona Medieval and Renaissance Texts and Studies, Tempe, AZ. Plans for the publication of Tolkien's verse and prose translations of Beowulf are under wraps at the moment. Sir Gawain and the Green Knight in Middle English, edited by J.R.R. Tolkien and E.V. Gordon, revised by Norman Davis, 1967, at the University of Virginia.
Top · Home · Colophon · Notes on the Illustrations · Site Map
29 August 2004 pkm