Sources · Under the Greenwood Tree 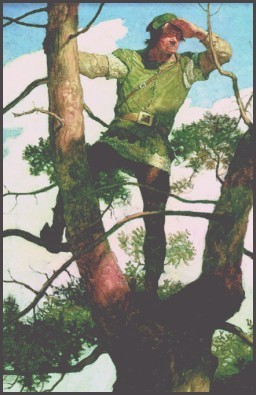 The quest for the origins of Robin Hood leads us deep into the murky forests of medieval England.

In their Introduction to "The Chronicler's Robin Hood," Stephen Knight and Thomas H. Ohlgren write:

Best known for his stirring adventures, Robin Hood is also an object of study by archivists and historians, seeking traces of a real Robin Hood who might, like the equally elusive King Arthur, be the real figure behind the myths -- or legends, as such historians would want to call them. In 1852 Joseph Hunter found a man called Robin Hood who was actually a valet to King Edward II in the north of England and assumed that he lay behind some of the story of the Gest. But there was no sign that the king's valet was ever thought of as an outlaw. More recently archivists have found other traces of criminals known to the medieval legal authorities as Hood, R.

In fact, it is the Scottish chronicler John Major who first

relocates the Robin Hood story into the late twelfth century, the much more distant time of King John. This is the first time that the outlaw is linked with the period of King Richard. In later hands this was to re-shape Robin's resistance to authority itself as an act of a noble conservatism, since bad King John could be attacked and true kingship defended at the same time. This does not appear to be Major's motif: his redating of the story in the period of John is probably due to the influence of the story of Fouke le Fitz Waryn, a noble outlaw and enemy of bad authority from that period.
[Knight & Ohlgren, Introduction to Historia Majoris Britanniae]

All Under the Greenwood Tree

A wealth of information on the historical and legendary Robin Hood is available in Robin Hood and Other Outlaw Tales, edited by Stephen Knight and Thomas H. Ohlgren, [Kalamazoo, Michigan: Western Michigan University for TEAMS, 1997], all of it available on the web.

The various essays, ballads, poems, and chronicles are indexed in the Author Menu at The Robin Hood Project; of special interest are:

Adam Bell, Clim of the Clough, and William of Cloudesley, an outlaw ballad of the sixteenth and seventeenth centuries in three fitts totaling 680 stanzas (the original text, with notes). Hereward the Wake, excerpts translated from the twelfth-century Gesta Herewardi, celebrating the resistance of the "native" Saxons and Danes of Lincolnshire to the Norman Conquest. Hereward is a real person, attested in Domesday Book and the Anglo-Saxon Chronicle. The Tale of Gamelyn, classified by by Lee C. Ramsey under the delightful category of "rebel romances," a tale in six fitts and 895 stanzas (the original text, with notes). There is much debate on the origins, dating, audience, and classification of this outlaw epic, detailed in the Introduction. Fouke le Fitz Waryn, extracts in translation from the Old French prose romance, based on an earlier version in verse.