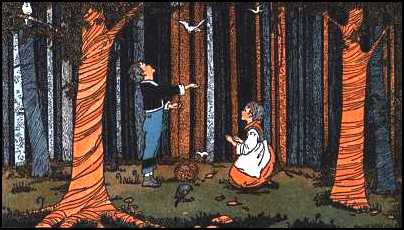 "The realm of fairy-story is wide and deep and high and filled with many things: all manner of beasts and birds are found there; shoreless seas and stars uncounted; beauty that is an enchantment, and an ever-present peril; both joy and sorrow sharp as swords. In that realm a man may, perhaps, count himself fortunate to have wandered, but its very richness and strangeness tie the tongue of the traveller who would report them. And while he is there it is dangerous for him to ask too many questions, lest the gate should be shut and the keys be lost."

-- J.R.R. Tolkien, "On Fairy-Stories," in The Monsters and the Critics and Other Essays

"The fairy tale journey may look like an outward trek across plains and mountains, through castles and forests, but the actual movement is inward, into the lands of the soul. The dark path of the fairy tale forest lies in the shadows of our imagination, the depths of our unconscious. To travel to the wood, to face its dangers, is to emerged transformed by this experience. Particularly for children whose world does not resemble the simplified world of television sit-coms ... this ability to travel inward, to face fear and transform it, is a skill they will use all their lives. We do children--and ourselves--a grave disservice by censoring the old tales, glossing over the darker passages and ambiguities..."

Classic Fairy Tales on the Net

The Brothers Grimm. Grimm's Fairy Tales includes 209 tales collected by the Brothers Grimm, probably based on the translation by Margaret Hunt called Grimm's Household Tales. This site is part of the Universal Library at Carnegie Mellon University.

Cinderella. The Cinderella Project at the University of Southern Mississippi, edited by Michael N. Salda, is an archive of texts and images containing a dozen English versions of "Cinderella," representing some of the more common varieties of the tale from the English-speaking world in the eighteenth, nineteenth, and early twentieth centuries. Materials to construct this archive were drawn from the de Grummond Children's Literature Research Collection at the University of Southern Mississippi. The earliest text is from the 1729 edition of Perrault's Histories. New URL.

Cinderella: Ashes, Blood, and the Slipper of Glass, an essay by Terri Windling from Realms of Fantasy magazine at the Endicott Studio. New URL.

Little Red Riding Hood by A'Lisa Ratledge at the University of Tennessee, with text, annotations, and notes.

The Path of Needles or Pins: Little Red Riding Hood, an essay by Terri Windling from Realms of Fantasy magazine, also at the Endicott Studio. New !

Snow, Glass, Apples: the story of Snow White, an essay by Terri Windling from Realms of Fantasy magazine, also at the Endicott Studio. New URL.