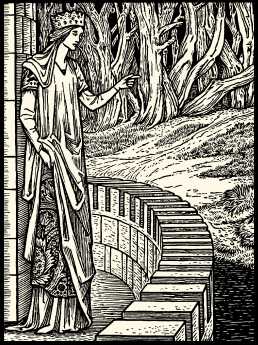 Terri Windling, editor, artist, writer, mentor, and muse, has had a hand in most of the books on my "favorites" shelves. Her passionate vision changed the direction of fantasy publishing over the last two decades, and she is a living example of the power of story to transform our lives. Simply put, she is one of my personal heroes, and I am honored to name her one of our Living Legends. - PKM

Into the Woods:
The Faery Worlds of Terri Windling

Throughout the 1980s, the editor who did the most to change the focus of fantasy from Howardian sword & sorcery to a renewed appreciation of fairytales and folklore and the Romantic tradition in literature, whose commitment to fantasy as a force in all our lives set the tone for the field, was Terri Windling.

Windling grew up in a blue-collar family in the mountains of Pennsylvania; she left home while still in her mid-teens, and enrolled in the New Directions program for underprivileged children at Antioch College. While attending she worked in a bookstore there in Yellow Springs, Ohio with Mark Alan Arnold; together they came to New York in the late 70s to seek work in publishing.

Windling's first professional assignment was as illustrator for the anthology Basilisk, edited by Ellen Kushner, who had been assistant editor at Ace, a position Windling later occupied, though she felt editing was only a stopgap in her true career goal of visual art.

Along with Arnold she edited three volumes of Elsewhere, elaborating on the Basilisk model of mixing fiction, poetry, and song lyrics, illustrated with evocative line drawings. She published early stories by such writers as Pat Murphy, Ellen Kushner, and Esther Friesner, as well as work by established writers such as Joanna Russ, Jane Yolen, and Fritz Leiber, and "mainstream" writers of the fantastic such as Jorge Luis Borges, Gabriel García Márquez, and Sylvia Townsend Warner. The first volume won the World Fantasy Award.

While considering submissions for Elsewhere, she discovered a group of writers workshopping in Minneapolis, and asked to see the novels they were working on; at the same time she suggested that they take a cue from Robert Aspirin's successful Thieves' World anthologies and create together a shared world suited to their talents. The result was the five volumes of Liavek, which showcased the work of editors Emma Bull and Will Shetterly, as well as Patricia Wrede, Pamela Dean, Steven Brust, Kara Dalkey and Charles de Lint (all of whose later novels formed the backbone of Ace fantasy for a number of years); guest writers like Gene Wolfe, John M. Ford and Alan Moore (of Watchmen fame) enriched the mix.

At the same time Windling was exploring other avenues: the urban fantasy of Megan Lindholm's Wizard of the Pigeons and the dark fantasy of Jonathan Carroll's The Land of Laughs (which had been published as an obscure mainstream hardcover; the Ace paperback edition gave Carroll a whole new audience). When Putnam/Berkley bought Ace Books in the mid-80s Windling became a consulting editor; she was responsible for a number of projects for several publishers. For Berkeley's Tempo line of young-adult books she created the MagicQuest series, bringing into paperback for the first time such fine works as Nicholas Stuart Gray's The Seventh Swan and Elizabeth Marie Pope's The Perilous Gard.

As a counterpart to Terry Carr's revered Ace Science Fiction Specials, Windling conceived a series of Ace Fantasy Specials; she acquired two titles for the line, Emma Bull's War for the Oaks and Delia Sherman's Through a Brazen Mirror.

The Fairy Tale Series of contemporary updating of classic stories (the first of which was Steven Brust's The Sun, the Moon, and the Stars, based on a Hungarian fairy tale), in collaboration with artist/designer Tom Canty, also began at Ace; for NAL she and Arnold originated the Borderland shared world. Aimed at a young-adult audience, the two anthologies Borderland and Bordertown, published by Signet (and republished more recently by Tor), were composed of novella-length pieces by Emma Bull and Will Shetterly, Ellen Kushner, Charles de Lint, and others; they described the area between Elfland and the World where neither magic nor science work consistently; where adolescents both elven and human form gangs, go to clubs, and play in folk-punk bands: fantasy for the MTV generation. Windling describes it as morally responsible fiction for troubled teenagers that suggests that banding together with your friends and being creative can transform your life.

All during her busy editing career Windling continued to draw and paint; she moved to Boston and formed the Endicott Studio with several other artists. They did a number of shows, including a memorable one on the theme of child abuse, an issue on which Windling has been very active politically; the culmination of this advocacy was the 1988 Tor anthology The Armless Maiden, an anthology of new and reprinted fiction and nonfiction, most notably Windling's autobiographical introductory essay.

For the last ten years Windling has been a consulting editor at Tor Books, where both the Fairy Tales and the Borderland series continue; 1998 will see the publication of The Essential Borderlands, and there will be further novels in the series to add to Emma Bull's Finder and Will Shetterley's Elsewhere and Nevernever.

Over the same period of time Windling has teamed up with Omni editor Ellen Datlow to produce The Year's Best Fantasy and Horror for St. Martin's, collecting a wide range of fantastic fiction from many sources. Windling's summation in the third annual volume (also a World Fantasy Award winner) was an important assessment of the evolution of fantasy during the entire decade of the 80s.

Resurrecting the fairy or wonder-tale for adults has been one of Windling's missions for over ten years, beginning with the Fairy Tales novels. In Women and Fairy Tales, a talk given by Windling in 1997 and available at The Endicott Studio website, she reminds us that the earliest

...magical tales of Italy and France (and the older oral tales they drew upon) were rich, complex and sensual works never meant for children's ears ... The French stories were less exuberantly scatalogical than the Italian ones, but were nonetheless written for an audience presumed to be adult, aristocratic, and educated. It was in the French salons that the term "fairy-tale" (conte de fée) was coined -- a colorful but misleading label, as many of the stories falling under it do not contain creatures called "fairies" at all. Rather, they are wonder tales, or märchen (to use the German word) -- tales about ordinary men and women in a world invested with magic.

The exploration of this "world invested with magic" is the uniting theme of the stories collected in the anthology series created by Windling, Ellen Datlow and Thomas Canty for Morrow/Avon, known by the title of the first volume, Snow White, Blood Red. Interlacing the story traditions of magic realism, heroic fantasy, and "dark" fantasy with the resonant, archetypal images of myth and folktales, these collections reclaim the conte de fée for an adult audience.

Windling currently lives half the year in Devon, England, in a thatched cottage decorated with wall murals by herself and artist-neighbors Alan Lee and Brian Froud, and half the year in Tucson, Arizona, the setting for her Mythopoeic Award-winning novel The Wood Wife.

Deeper into the Woods ...

The Endicott Studio "was founded by Terri Windling in 1987 as a creative center devoted to contemporary art projects rooted in themes from folktales and myths." This gorgeous new website features an interview with Terri Windling, as well as a comprehensive bibliography, essays on folklore and fiction, an art gallery, and other magical things. The Wood Wife, Terri Windling's first novel, won the Mythopeic Fantasy Award for best novel of 1996. This magical novel merges the fantastic traditions of the American desert southwest and the ancient English countryside. Read an excerpt at the Tor Books page. Borderland: where magic meets rock & roll. Complete bibliography and publishing chronology at the Endicott Studio site.