Knighthood in Flower · El Cid Campeador · Roland · Aucassin & Nicolette The Song of Roland (Chanson de Roland) is the first and unquestionably the greatest of the chansons de geste. 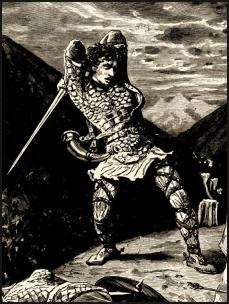 Charlemagne's wars were chiefly against the pagan and barbarous people, who, under the name of Saxons, inhabited the countries now called Hanover and Holland. He also led expeditions against the Saracens of Spain; but his wars with the Saracens were not carried on, as the romances assert, in France, but on the soil of Spain. He entered Spain by the Eastern Pyrenees, and made an easy conquest of Barcelona and Pampeluna. But Saragossa refused to open her gates to him, and Charles ended by negotiating, and accepting a vast sum of gold as the price of his return over the Pyrenees.

On his way back, he marched with his whole army through the gorges of the mountains by way of the valleys of Engui, Eno, and Roncesvalles. The chief of this region had waited upon Charlemagne, on his advance, as a faithful vassal of the monarchy; but now, on the return of the Franks, he had called together all the wild mountaineers who acknowledged him as their chief, and they occupied the heights of the mountains under which the army had to pass. The main body of the troops met with no obstruction, and received no intimation of danger; but the rear-guard, which was considerably behind, and encumbered with its plunder, was overwhelmed by the mountaineers in the pass of Roncesvalles, and slain to a man. Some of the bravest of the Frankish chiefs perished on this occasion, among whom is mentioned Roland or Orlando, governor of the marches or frontier of Brittany. His name became famous in after times, and the disaster of Roncesvalles and death of Roland became eventually the most celebrated episode in the vast cycle of romance. [Thomas Bulfinch, Legends of Charlemagne, or Romance of the Middle Ages, 1863]

The Song of Roland is generally dated to the late eleventh century, and tells the story of the betrayal and death of Roland (in Frankish, Hruodlandus), nephew of Charlemagne, in the Basque country of Roncesvalles.

In the Renaissaance, the story of Roland formed the seed for two fantastical romances Orlando Innamorato (Roland in Love) (1495) by Matteo Maria Boiardo (left unfinished at the author's death) and a continuance, Orlando Furioso (Roland Enraged) (1516) by Ludovico Ariosto.

The Song of Roland, the Charles Scott Moncrief translation (1919), at the Online Medieval and Classical Library at Berkeley. The Song of Roland, translated by John O'Hagan (c. 1910), at The Internet Medieval Sourcebook. The Song of Roland, a prose translation by Jessie Crossland, from In Parentheses [PDF]. La Chanson de Roland in Old French, at ABU. Thoughts on Reading The Song of Roland, an essay by Lynn Harry Nelson, Emeritus Professor of Medieval History, at the University of Kansas, part of Lectures in Medieval History at The Historical Text Archive. New URL. Orlando Furioso, the William Stewart Rose translation (1910), at the Online Medieval and Classical Library at Berkeley. The Introduction includes a synopsis of Orlando Innamorato "omitting most of the numerous digressions and incidental episodes." Literature and the Middle Time, an essay on the social contexts of medieval literature by Gerald Seaman, one of the "Essays on Medieval Europe" at Exploring Ancient World Cultures at the University of Evansville.

The Keeping of the Passes, a story of Roland from Heroic Legends by Agnes Grozier Herbertson [1908], illustrated by Helen Stratton, at the Kellscraft Studio. Roland, the Hero of Early France from Hero-Myths and Legends of the British Race by Maud Isabel Ebbutt (1910). New ! The Story of the Song of Roland from National Epics by Kate Milner Rabb (1896). New !
Top · Home · Colophon · Notes on the Illustrations · Site Map
26 December 2005