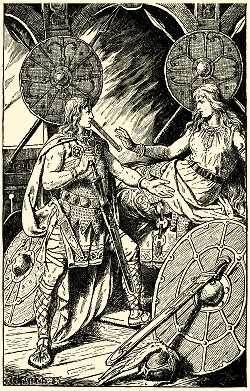 Sigurd the Dragon-Slayer is the hero of the anonymous thirteenth-century Icelandic prose epic Völsungasaga, based on legends of Old Scandinavian folk culture that survive in the Elder Edda (or Poetic Edda) and the Younger Edda (or Prose Edda). The story of Sigurd the Volsung in turn served as a source for authors from Richard Wagner to William Morris to J.R.R. Tolkien.

Contemporary with Völsungasaga is another version of the tale, the Middle High German epic the Nibelungenlied. Here the story of the hero (called Siegfried) takes on a High Gothic gloss of knighthood, where Völsungasaga retains the primitive and pagan force of its Eddic precursors.

The nineteenth century saw a real vogue for the saga tales, and the English William Morris and the German Richard Wagner represent the most important resurgence of the Eddic material and spirit ... [Robert W. Gutman, in the Introduction to Volsunga Saga, Collier Books, 1962]

William Morris's 1870 translation of the Volsunga Saga was the crowning achievement of his translations from the Norse sagas, and in turn fathered his lyric poem Sigurd (1877), a retelling of the Saga with elements from the Nibelungenlied contemporaneous with Wagner's Ring cycle. Morris's saga translations also influenced his Tale of the House of the Wolfings, and All the Kindreds of the Mark Written in Prose and in Verse (1889).

When the young J.R.R. Tolkien won the Skeat Prize for English in the spring of 1914, he used the proceeds to purchase copies of Morris's Volsunga Saga and The House of the Wolfings:

In this book Morris had tried to recreate the excitement he himself had found in the pages of early English and Icelandic narratives. The House of the Wolfings is set in a land which is threatened by an invading force of Romans. Written partly in prose and partly in verse, it centres on a House or family-tribe that dwells by a great river in a clearing of the forest named Mirkwood, a name taken from ancient German geography and legend.... Its style is highly idiosyncratic, heavily laden with archaisms and poetic inversions in an attempt to recreate the aura of ancient legend. Clearly Tolkien took note of this, and it would seem that he also appreciated another facet of the writing: Morris's aptitude, despite the vagueness of time and place in which the story is set, for describing with great precision the details of his imagined landscape. [Humphrey Carpenter, Tolkien: A Biography, 1977, p. 70]

The tale of Sigurd Fafnirsbane is repleat with dragon-treasure, a broken sword reforged, shield-maidens, and a dwarf-ring that brings a curse on its wearers. The Story of Sigurd, from Andrew Lang's Red Fairy Book, at the University of Virginia. The Story of the Volsungs with excerpts from the Poetic Edda, translated from the Icelandic (Old Norse) by William Morris and Eirikr Magnusson (from the 1888 Walter Scott Press edition), at the Online Medieval and Classical Library at Berkeley. Völsunga saga in Old Norse. The Story of Sigurd the Volsung, excerpts from William Morris's epic poem, at Representative Poetry Online at the University of Toronto. Sigurd the Volsung, an essay on Sigurd's place in Morris's work, from The Cambridge History of English and American Literature in 18 Volumes (1907–21), online at Bartleby.com. The Nibelungenlied, a text based the translation by Daniel B. Shumway (Houghton-Mifflin Co., 1909) at the Online Medieval and Classical Library at Berkeley. The Nibelungenlied, from In Parentheses, and Richard Wagner's The Ring of the Niblung: Siegfried & The Twilight of the Gods, both translated by Margaret Armour, c. 1910. New ! The Story of the Ring has links to synopses and libretti of Wagner's Ring cycle; it's at Mike Rudolph's Walhall.

Sources in Medieval Literature of Wagner's "Der Ring des Nibelungen" and William Morris's "Sigurd the Volsung," a thesis by Jane Susanna Ennis of the University of London, excerpted by the author at the Richard Wagner Archive in Finland. All for the Tale: The Epic Macropoetics of Morris' Sigurd the Volsung [PDF] by Herbert F. Tucker, from Victorian Poetry Vol. 34, no. 3 (1996), a peer-reviewed scholarly journal devoted to British and colonial poetics of the Victorian age (1830-1914). The Sons of Odin: A Heroic Analysis of the Volsunga Saga by Devyn Christopher Gillette, at Raven Online.
Top · Home · Colophon · Notes on the Illustrations · Site Map
10 July 2004