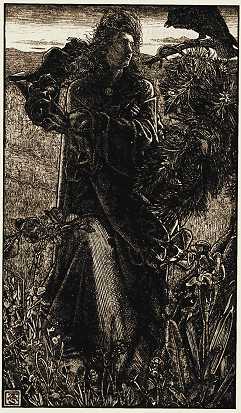 In the dawn of time there was a great void in the centre of the world. This abyss was Ginnunga-gap, and was cloaked in perpetual twilight. To its north was the realm of Nifl-heim - the source of mist and darkness, and also an eternal spring from which all other rivers flowed ...
[In the Beginning]

The Eddas. The great corpus of Scandinavian mythology is contained in the two volumes called the Eddas. The Elder or Poetic Edda as we know it was compiled in the thirteenth century in Iceland, but some of its tales (at least) date back to the period of the early German migrations. The Poetic Edda is also known as Saemond's Edda (Edda Sæmundar).

The Younger or Prose Edda (Snorra Edda)was written by Snorri Sturluson (1179-1241) around 1230. Its two parts are Gylfaginning, an introduction Norse myths for poets, and Skaldskaparmal, a history of poetry.

The Sagas. Sagas are prose tales of kings, warriors, poets, and explorers; some are historical chronicles, some are pure fiction, and some (in the way of much medieval literature) partake of both fact and fiction.

The sagas are without doubt Iceland's most important contribution to world literature. They are medieval prose narrative, abounding in paradox and iron. Violence is abundant, but the style is subdued. Heroism is praised, but moderation is more highly prized. Much is said of fate, but the complex characters seem to control their own destinies. The world of the saga is pagan, but its sentiment is humanitarian. [Antti Lahelma, Icelandic Literature]

One of the best-known sagas is Heimskringla, a history of the kings of Sweden and Norway, also written by Snorri Sturluson.

Early Scandinavian literature, prose or poetry, is rich in heroic tales of kings, elves, seeresses, explorers, dwarves, magic-wielders and sword-bearers; its influence colors much of the imaginative literature of the nineteenth and twentieth centuries. Here is our introduction to this magical world.

Balder's Death from the Prose Edda of Snorri Sturluson, at D. L. Ashliman's Folklore and Mythology Electronic Texts. The Ash Tree in Indo-European Culture. Explore the origins of Yggdrasil, the world-tree, in this fascinating essay by Darl J. Dumont, from Mankind Quarterly, Summer 1992.

The Eddas and Sagas

An Introduction to the Works of Snorri Sturluson for young people, in Iceland. Heimskringla, or The Chronicle of the Kings of Norway by Snorri Sturluson, a text based on the 1844 Samuel Laing translation, at the Online Medieval and Classical Library at Berkeley. Ása: Norse Mythology Source Texts includes the Elder or Poetic Edda, The Younger or Prose Edda, and other texts in English translation. Source Texts for Old Norse literature at Northern Winds. The Prose Edda, translated by Arthur Gilchrist Brodeur (1916), electronic text from the Internet Sacred Text Archive. OLDNORSENET "provide[s] a forum for discussion of problems that concern the medieval Scandinavian and North Atlantic societies ... open for contributions from researchers in all branches of medieval studies concerning the Nordic area." Their Discussion Archive is available to the public.

RuneType: the Rune Typology Project "computerizing the runic inscriptions at the Historic Museum in Bergen."

Tolkien and Iceland: The Philology of Envy, a lecture by Tom Shippey at the Sigurður Nordal Institute at the University of Iceland. "It is very easy now for us to forget or to underestimate the impact which Old Norse literature had on the learned world as it was rediscovered, from Icelandic sources, between the seventeenth and the nineteenth centuries..." New ! Philology and Fantasy Before Tolkien by Andrew Wann, also at the Sigurður Nordal Institute, explores the saga-influenced novels of Ernest Ruckert Eddison.

"Eddison is an intriguing 'Before Tolkien' phenomenon. His sequence of three clearly interconnected 1920s books helps us to recognise two basic points about pre-Tolkien British novelistic responses to Icelandic medieval literary tradition: firstly, that there was a vigorous 'pre-Tolkien' tradition of such responses, and, secondly, that this tradition often had a strong philological underpinning." New !

at Litrix. , commentary at Wizards of the Coast.