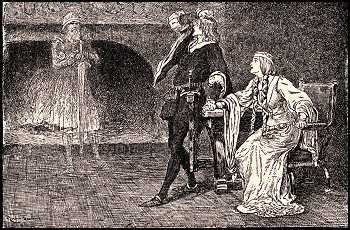 Shakespeare's Tragedy of Hamlet, Prince of Denmark is based on a 12th century tale by Saxo Grammaticus, which Shakespeare most certainly never saw, and is part of a spate of revenge dramas which were extemely popular around the turn of the seventeenth century; the missing link between Saxo and Shakespeare may be an earlier play about Hamlet (called by scholars the Ur-Hamlet), which may or may not have been written by the Ur-Revenger himself, Thomas Kyd, based in turn on François de Belleforest's Histoires tragiques (1570), a free translation of Saxo.

The revenge drama derived originally from the Roman tragedies of Seneca but was established on the English stage by Thomas Kyd with The Spanish Tragedie (c. 1590). This work, which opens with the Ghost of Andrea and Revenge, deals with Hieronimo, a Spanish gentleman who is driven to melancholy by the murder of his son. Between spells of madness, he discovers who the murderers are and plans his ingenious revenge. He stages a play in which the murderers take part, and, while enacting his role, Hieronimo actually kills them, then kills himself. The influence of this play, so apparent in Hamlet (performed c. 1600-01), is also evident in other plays of the period. -- Excerpted from "Revenge Tragedy," Shakespeare and the Globe: Then and Now, from Encyclopedia Britannica Online.

Amleth, Prince of Denmark, from the Gesta Danorum of Saxo Grammaticus, edited by D. L. Ashliman, is at the University of Pittburgh.

Saxo's tale of Amleth, written about 1185 C.E. but based on earlier materials, is source for the story that would become Shakespeare's Hamlet. The complete Gesta Danorum with extensive introductory notes is available in English as The Nine Books of the Danish History of Saxo Grammaticus, in the Oliver Elton translation (Norroena Society, New York, 1905) at Berkeley. The Gesta is also available in the orignal Latin at the Danish National Literature Archive (Dansk Nationallitterært Arkiv). New URL.

"When people ask, 'Why do Hamlet?', I say all the answers are contained in Bleak Midwinter. Those answers include: I don't know. I have to. It's funny. It's marvellous. It's ridiculous. It's meaningful. It's meaningless." -- Kenneth Branagh

The Hamlet Home Page includes the text of the play, a scene-by-scene summary, essays, and other useful information. New URL. Hamlet Online, an annotated guide to internet resources on the play. New ! Hamlet as hypertext, at MIT, and as text at the Texas School for the Blind and Visually Impaired. The Enfolded Hamlet, a searchable color-coded variorum Hamlet, by Bernice W. Kliman. "The Enfolded Hamlet is a child born of struggle. When I approached colleagues about collaborating on the new variorum Hamlet project I have coordinated since 1987 ... their first question was, Which copy-text, Q2 (1604/5) or F1 (1623)?' To my response, 'F1,' they raised eyebrows: well, that would be daring. The main argument against the folio - that it is a text contaminated by theatrical experience - was for me the principal argument in its favor...'" A Teacher CyberGuide for Hamlet, developed for the Schools of California Online Resources for Educators (SCORE) Project.

And Other Fun Stuff

The Tale of "Hamlet, Prince of Denmark," from Charles and Mary Lamb's Tales from Shakespeare. In the Bleak Midwinter, released in the US as A Midwinter's Tale, has been described as "Spinal Tap for the Shakespeare set." This black-and-white mock-documentary of the attempts of an impassioned director (Michael Maloney) to stage a production of Hamlet in a rustic church over the Christmas holidays may be director Kenneth Branagh's most painfully delightful film. Not to be missed. - PKM Hamlet in Klingon, from the Klingon Shakespeare Restoration Project. "The Klingon version is the result of years of painstaking work by a team of scholars, who worked to capture both the meaning and the poetry of the Bard's most famous play in Klingon... Cultural references, poetic structure, writing style, and even wordplay are all represented in the Klingon version, recreated in Klingon, not merely copied in new lettering."
Top · Home · Colophon · Notes on the Illustrations · Site Map
13 February 2004