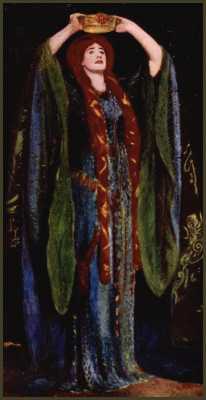 The Scottish Play is based loosely on an episode from history, the death of King Duncan at the hands of his kinsman Macbeth.

"King Malcolm II ... reigned from 1005 to 1034 and was the last king in the direct male line to descend from Kenneth MacAlpine, who united the Scots and Picts in 843 A.D. and is considered the founder of Scotland. One of Malcolm's three daughters, Bethoc, married Crinan, the secular hereditary Abbot of Dunkeld. Through her, the Abbot's son [Duncan] was installed by Malcolm as the King of Cumbria in 1018. After Malcolm II's murder by his nobles at Glamis, Duncan killed his opponents and seized the throne as King Duncan I. His first cousins, Macbeth (of Shakespearian fame) and Thorfinn the Raven Feeder, Norwegian Earl of Orkney, united to advance MacBeth's claim to the throne through his mother, another daughter of Malcolm II. Duncan reigned from 1034 until he was defeated in battle by their combined armies and killed by MacBeth in August 1040 at Elgin. Scotland was then ruled by Thorfinn in the northern districts and MacBeth in the southern districts." -- James E. Fargo, FSA Scot., Clan Donnachaidh History.

In researching Macbeth for her novel, King Hereafter, Dorothy Dunnett concluded that Macbeth and Thorfinn Earl of Orkney were one and the same, "Macbeth" being a baptismal name, but that research has never been published. What is certain is that early Annals and Scottish Regnal lists call Macbeth the son of Findlaech; and Thorfinn surely succeeded Sigurd "the Corpulent" as Earl of Orkney.

Beyond that, stories conflict. Macbeth and Thorfinn are variously allies, antagonists, and half-brothers (not that these are mutually exclusive in medieval Scotland!).

The wife of Macbeth is called "Gruoch" or "Grauch" in the genealogies. She was the granddaughter of Kenneth III, and by her first husband Gillacomgan, the mother of Lulach, who succeeded Macbeth as King of Scots for four months in 1057-1058.

After the defeat of Macbeth and Thorfinn, Duncan's brother Malcolm (later Malcolm III Canmore) may have married Ingibiorg, the widow of Thorfinn (or was it Gruoch, widow of Macbeth?) as his first wife.

Macbeth, a hyperlinked history at Scotland's Past. Notes on the historical Macbeth by Michael Davidson of Bates University are in the database of the "Mediev-L" discussion list. Scottish Origins up to William Wallace by Robert M. Gunn tells a story of Macbeth and Thorfinn as allies in Chapters 3 and 4. General History of the Highlands: Macbeth through to Malcolm III 1093 at Electric Scotland.

Macbeth as hypertext, at MIT. Macbeth, from Shakespeare and the Globe: Then and Now at the Encylcopedia Britannica Online. To Strut and Fret Upon the Stage: A Theatrical Interpretation of Sources for Macbeth , an essay by Joseph "Chepe" Lockett. Angels and Ministers of Grace: Theatrical Superstitions Through the Ages by Kristen McDermott, from the Journal of Mythic Arts: Winter 2005. New URL.
Top · Home · Colophon · Notes on the Illustrations · Site Map
6 March 2005