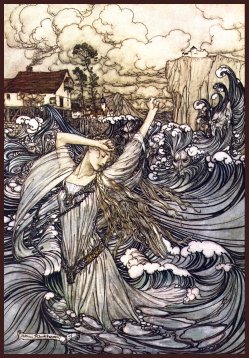 The seal-folk of Scotland and Ireland, variously called selchies, selkies, silkies, or roanes, have a habit of swimming out of the mists of Faery and landing on the shores of popular culture.

Those of a certain age will remember haunting versions of the ballad The Great Silkie of Sule Skerrie by Joan Baez and Judy Collins in the 1960s, and younger readers will know John Sayles's film The Secret of Roan Inish or the novel that inspired it, Rosalie K. Fry's Secret of the Ron Mor Skerry.


The legend of the selchie is found along the shores of Britain and Eire; there are selchie stories from Cornwall, Ireland, and most particularly the northern islands off Scotland: the Orkneys, Shetlands, and Hebrides.

Unlike other merfolk, selchies can shed their seal-skins on the land and pass for humans, usually with tragic consequences.

A Home for Selkies has links to mythological, historical, and folk tales of selchies.

Orkneyjar, the Heritage of the Orkney Islands by Sigurd Towrie, is a lovely site dedicated to the folklore, fairy-tales, history, and traditions of Orcadia. The Selkie-Folk at Orkneyjar. One Spared to the Sea, a selchie story by W. Towrie Cutt.

Perhaps the best-known selchie story concerns an earthly woman whose mysterious lover is a selchie; this is the story told in the ballad The Great Selkie of Sule Skerrie (Child #113).

The Great Selkie o' Sule Skerry at Orkneyjar has lyrics and notes on the island of Sule Skerry.

Silkie, two versions of the ballad at Folk Music of England, Scotland, Ireland, Wales and America edited by Lesley Nelson. Recordings of The Great Silkie at the Folk Music Index.

Another selchie story tells of a fisherman who took a selchie to wife and hid her seal-skin, so that she could not return to her home in the sea; this is the tale told by the grandmother in The Secret of Roan Inish ("Roan Inish" is Irish for "Seal Island").

The Selkie, a version of the tale from the Hebrides, retold by Mara Freeman. New URL.

The Seal-Woman's Croon (An Cadal Trom) from "Songs of the Hebrides".
Top · Home · Colophon · Notes on the Illustrations · Site Map
6 March 2004