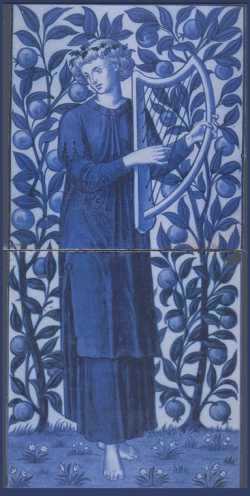 Early medieval Wales is a rich source of legendary materials; not only the earliest references to Arthur, Merlin, Peredur, Urien, and Gereint, but also the bard Taliesin (later, like Merlin, transmogrified into a great wizard) and the characters that underlie Lloyd Alexander's beloved Prydain cycle.

Taliesin. The bard Taliesin is associated with the late-sixth century court of Urien of Rheged.

Taliesin at Celtic Twilight has a biography, literary overview, and six poems from Llyfr Taliesin (The Book of Taliesin) in both Welsh and English:

Aneirin. To Aneirin is attributed y Gododdin, the oldest surviving heroic poetry in Welsh. The Gododdin (in Latin, Votadini) of the poem are a warband who failed to retake Catraeth (Catterick) from the Saxons. Y Gododdin may contain the oldest mention of King Arthur.

Aneirin at Celtic Twilight includes an overview and the following texts in Welsh and English:

Heroic Poetry, Chapter One of Welsh Literature at Britannia.

Pedeir Keinc y Mabinogi, or The Four Branches of the Mabinogi, is a fourteenth century collection of tales in Welsh, drawing on much older material. The earliest manuscript of the complete Mabinogion is in the Red Book of Hergest, although portions are included in the slightly earlier White Book of Rhydderch. The Four Branches proper are mythological tales. Other tales from the Red Book are usually published with the Four Branches; these include Culhwch And Olwen, Owain, or The Lady of the Fountain, and tales of Peredur son of Evrawc. Y Mabinogion at Taffnet features these tales in Lady Charlotte Guest's translation of 1849 (updated):     The Four Branches
Other Tales from from The Red Book:
The Mabinogion and the Mabinogi features an Introduction and new literal translations from the White Book of Rhydderch by freelance medievalist W.M. Parker, with extensive annotations. New !

The Four Branches
Mabinogion features three tales from Pwyll Prince of Dyfed, "based in part on" translations by Jeffrey Gantz, from Rhiannon Morgaine James. The Influence of The Mabinogi on Modern Fantasy Literature by C.W. Sullivan III, at Celtic Cultural Studies: An Interdisciplinary Online Journal, a peer-reviewed online academic journal. New URLs. The Red Book of Hergest: 600 dpi scanned images of Jesus College MS. 111 of The Red Book of Hergest, part of Early Manuscripts at Oxford University. New !

A Welsh Course at Brown University (learn Welsh at home in your spare time!) includes a glossary and lexicon.

The History and Status of the Welsh Language by Gereint Jones was originally conceived as a companion to the Welsh language course at Brown, but is now available separately.

Wales at Britannia by Peter N. Williams, Ph. D. "supports the resurgence of interest in the Welsh language and culture which has been gaining strength over the last three or four decades." It includes a Brief History of Wales and A Introduction to Welsh Literature.

Early Medieval Wales at the Castles of Wales has an overview, a map, and links to biographies of the key players.