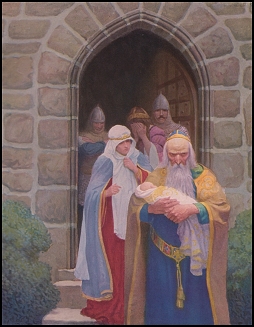 The prophet Merlin, a clever synthesis based on far more ancient characters, first appears c. 1135 in Geoffrey of Monmouth's Historia Regnum Britanniae or History of the Kings of Britain; Geoffrey also wrote a Vita Merlini (Life of Merlin) and added a sequence of "Merlin's Prophecies" to later versions of his Historia.

Geoffrey blended two older story-strands: a long-lived British folkloric tradition of a "Wildman of the Woods," sometimes called Lailoken and, later, Myrddin, and a story from Nennius' Historia Brittonum or History of the Britons of a fatherless boy called Ambrosius who prophesies the doom of King Vortigern. This composite character Geoffrey called "Merlin Ambrosius" is the source for the Merlin the Magician we know today.

Merlin & the History of Britain

In Geoffrey's conception, Merlin is the son of a nun of royal birth, engendered by a demon; this half-human origin becomes over time the source of Merlin's prophetic powers. In Robert de Boron's old French verse Merlin, he "plays a redemptive role as mediator between earthy chivalry and the heavenly plan of salvation: he oversees the conception of Arthur, creates the symbolism of the Round Table, and prepares Perceval for the Grail quest" (William W. Kibler, The Arthurian Encyclopedia, Garland Press 1986).

Merlin's position in the popular imagination as a great seer was secure from Geoffrey's time onward; political "prophecies of Merlin", tuned to the times, were still being published well into the seventeenth century, the best known perhaps being The Life of Merlin, Sirnamed Ambrosius. His Prophesies, and Predictions Interpreted; And Their Truth Made Good by Our English Annalls. Being a Chronographicall History of All the Kings, and Memorable Passages of This Kingdome, from Brute to the Reigne of our Royall Soveraigne King Charles, written by Thomas Heywood in 1651.

Myrddin/Merlin by Thomas Green at his Arthurian Resources site summarizes the pre- and post-Geoffrey of Monmouth Merlin cycles. New ! Merlin and Geoffrey of Monmouth, at the Camelot Project. Merlin and Nimue at Britannia. The Prophecy of Merlin (Dublin MS), edited by James M. Dean, from Medieval English Political Writings, at TEAMS. Arthurian Passages from the History of the Kings of Britain by Geoffrey of Monmouth, edited and translated by J.A. Giles, D.C.L., at the Camelot Project. Nennius' Historia Brittonum at The Internet Medieval Sourcebook, part of ORB, the Online Reference Book for Medieval Studies. Prose Merlin, a late medieval Arthurian work written near the middle of the fifteenth century, edited by John Conlee, with an introduction, at TEAMS.

Some Notes on Merlin by C. Scott Littleton and Linda A. Malcor, from Arthuriana. Ancient Echoes: Transformations of Celtic Mythology in Arthurian Legend, part of the Quest at the University of Idaho. Historiography of the Middle Ages, 400-1200: Dark Rooms and Dry Straw by Sheila Brynjulfson at Vortigern Studies. Geoffrey of Monmouth, an article by Rod Hampton at Britannia. Historia Brittonum, an annotated essay on Nennius and the Historia by Robert Vermaat at Vortigern Studies. Concerning the Name Myrddin by Heather Rose Jones at Medieval Scotland. New !

Sir Gowther, a poem found in two late fifteenth-century manuscripts, tells the tale of the half-brother of Merlin. The Introduction discusses the intricate interplay of source-material that built this legend. A Famous Prediction of Merlin, the British Wizard by Jonathan Swift, 1709. The Boy Apprenticed to an Enchanter, a novella by Padraic Colum. The Birth of Merlin, or, The Childe Hath Found His Father, a play of c. 1620, first published in 1662 as by "William Rowley and William Shakespeare"; modern scholars doubt that Shakespeare has any hand in it.