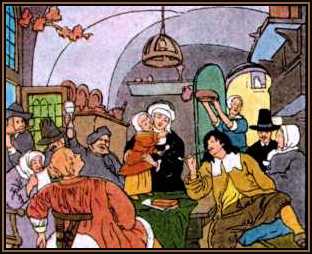 11 May 2003: New in Swashbucklers & Fops: The Novels of Rafael Sabatini.
10 May 2003: Tam Lin will be made into an animated film designed by Wendy and Brian Froud from a script by Neil Gaiman. Get the scoop in Ballads & Broadsides: Tam Lin. 8 September 2002: Beowulf on Steorarume (Beowulf in Cyberspace) features a new critical electronic edition of the text, English and German translations, introduction, links to resources, and glossary. Find it in Beowulf: Sources.

Look for many new links in Poets & Painters: William Morris.
24 August 2002: We've updated many links in King Arthur and the Matter of Britain. See General Sources, History & Archaeology, and Welsh Bards. 23 March 2002: Two new tales of the Greenwood: Robin Hood by Henry Gilbert and The Black Arrow by Robert Louis Stevenson, both in lovely illustrated online editions from Kellscraft Studio. Find them in The Robin Hood Pages: Sources. 11 March 2002: Francis James Child's The English and Scottish Popular Ballads is being brought back into print in a new corrected edition from Loomis House Press; get the details in Ballads & Broadsides: Sources. 21 January 2002: The things one can find on the web! Alfred Lord Tennyson's The Foresters: Robin Hood and Maid Marian, with MIDI files and the complete score for the songs and music by Arthur Sullivan, at the Gilbert and Sullivan Archive. Find the link in The Robin Hood Pages: Sources.
18 November 2001: We've added many new links in King Arthur and the Matter of Britain. See The Quest for Arthur, History & Archaeology, and Merlin & the History of Britain. 1 July 2001: Get the latest on the excavations of Blackbeard's flagship Queen Anne's Revenge in Pirates & Privateers: Blackbeard, and check out our updated Pirate Resources. 14 June 2001: New in King Arthur and the Matter of Britain: The Quest for Arthur examines the historical, literary and legendary origins of the king.

And check out our new sources for the primary texts of The Welsh Bards and additional links in History & Archaeology. 9 June 2001: Now you can use search Legends with Google! Visit our updated Search Page. 23 November 2000: We've updated and expanded Ballads & Broadsides with new Sources and more material on Tam Lin.

We also expanded our Swashbucklers page to include links to the complete library of novels featuring The Scarlet Pimpernel. 5 August 2000: New in Paladins & Princes: Additional resources on El Cid Campeador, including links to an extensive online library of scholarly texts about medieval Iberia. 7 November 1999: New in Ballads & Broadsides: a link to the Broadside Ballads Project at the Bodleian Library, which makes digitized images from its collection available on the 'net. The link is in Ballad Resources. 30 May 1999: New in Paladins & Princes: Aucassin & Nicolette, a fable about the triumph of True Love from medieval France.

Did you know? If you're curious about the illustrations in Legends, just click on the link to Notes on the Illustrations at the bottom of every page for the artist, publisher, and source for the picture, plus more detail than you'd ever want to know about how the picture was manipulated for its appearance here.

21 March 1999: New in Ballads & Broadsides: a collection of Child Ballads at Folk Music of England, Scotland, Ireland, Wales, and America, and a project to create a digital collection of Border Ballads at the University of Glasgow. Find the links in Ballad Resources. 29 January 1999: New in King Arthur & the Matter of Britain: Elaine of Astolat explores the story and haunting imagery of the Lady of Shalott.

And a new link in Erin & Alba: Patrick Brown's The Ulster Cycle includes 25 tales from the north of Ireland.

28 November 1998: New in Fairy Tales: Selchies tells stories of the seal-folk of Celtic lands. 18 October 1998: So many of our key Arthurian and Robin Hood resources have moved their pages that I haven't bothered to tag all the new URLs; the updated links are in The Robin Hood Pages and King Arthur and the Matter of Britain. 21 September 1998: New in Pirates & Privateers, Gráinne O'Malley, the sixteenth century "Pirate Queen of Connaught."

Fans of the Robin of Sherwood television series will want to take a look at Robin Hood: Bold Outlaw of Barnsdale and Sherwood; find the link on The Robin Hood Pages.

4 September 1998: Andrew Lang's A Collection of Ballads (1910) is now available as electronic text from Project Gutenberg; the link is in Ballads & Broadsides: Ballad Resources. 17 August 1998: Poets & Painters crosses the Atlantic to profile America's most important writer/illustrator of adventure fiction, Howard Pyle. 16 August 1998: Legends celebrates its first anniversary with a new section, Poets & Painters, celebrating the artists and writers who brought the legends to life. The master of them all is William Morris, father of the arts and crafts movement and inventor of the modern fantasy novel. 21 June 1998: New in King Arthur & the Matter of Britain: Sir Tristan & La Belle Iseult, a legend of Cornwall. And in History & Archaeology, a link to The Ruin and Conquest of Britain 400 A.D. - 600 A.D., a reconstruction from primary sources by Howard Wiseman. 6 May 1998: New in Ballads & Broadsides: Tam Lin & Fair Janet looks at this well-loved and influential story of fairy enchantment and true love. 2 May 1998: New in King Arthur & the Matter of Britain: Merlin & the History of Britain explores the origins of the story of Myrddin Emrys. And in History & Archaeology, a link to an interactive gazetteer of Sub-Roman Britain. 6 April 1998: New in The Robin Hood Pages: Under the Greenwood Tree explores outlaw legends of medieval England.

And check out Alexandre Dumas, deux siècles de littérature vivante, a new website on Dumas and his works from La Société des amis d'Alexandre Dumas (in French, with English summaries).

20 March 1998: New in King Arthur & the Matter of Britain: Percival the Fool, whose story is essentially unchanged after 800 years. 25 February 1998: New in Pirates & Privateers, the adventures of Captain Sir Francis Drake, Queen Elizabeth's Sea-Dragon. 13 February 1998: New in Paladins & Princes, the story of Roland, the nephew of Charlemagne who became the Orlando of renaissance fantasy. 2 February 1998: New in Fairy Tales: Donald G. Keller profiles editor, artist, and writer Terri Windling in Into the Woods: The Faery Worlds of Terri Windling. 14 January 1998: A new section Paladins & Princes begins our exploration of heroes of the Middle Ages with Knighthood in Flower and El Cid Campeador. 9 January 1998: More in Sagas & Sea-Kings: The Northern World is an introduction to Norse mythology and Icelandic literature, while The Viking Age separates history from myth. 29 December 1997: A new section, Sagas & Sea-Kings, kicks off with Sigurd the Volsung, a story from the Eddas retold by Richard Wagner and William Morris, and an important early influence on the imaginary worlds of J.R.R. Tolkien. 20 December 1997: New in The Robin Hood Pages: Links to electronic texts of Howard Pyle's The Merry Adventures of Robin Hood and to J. Walker McSpadden's Robin Hood. 13 December 1997: New in King Arthur & the Matter of Britain: Guenevere the Queen explores the evolution of her character and the stories of Lancelot. 4 December 1997: New in Swashbucklers & Fops: The Three Musketeers as electronic text, an essay by Robert Louis Stevenson on The Vicomte de Bragelonne, and a sneak preview of the new film of The Man in the Iron Mask, all on our new Alexandre Dumas page. 3 December 1997: A new section on Beowulf includes Sources for this Old English epic and for study of the Anglo-Saxon world. 10 November 1997: New in Pirates & Privateers: A link to Howard Pyle's Book of Pirates online, and a new page on Blackbeard the Pirate, including updates on the excavation of the wreck that may be Blackbeard's flagship Queen Anne's Revenge. 21 October 1997: New in Shakespeare's Stories: additional links in Shakespearean Sources, and a new page on Macbeth. 16 October 1997: Not being content with taking on King Arthur, we take on Shakespeare as well! In the new section Shakespeare's Stories: Shakespearean Sources and Hamlet. 2 October 1997: I said that building a comprehensive Arthurian site might be redundant, not that I wasn't going to try it. New in King Arthur & the Matter of Britain: Malory's Le Morte Darthur and Tales of Gawain. 8 September 1997: In King Arthur & the Matter of Britain: History & Archaeology has a new map of Roman Britain. 7 September 1997: In our newest section, Fairy Tales: Classic Tales explores the origins and evolution of Cinderella, Red Riding Hood, and other classic fairy stories.

In Ballads & Broadsides: We have expanded Shake Loose the Borders with links to more materials on the culture and history of the Anglo-Scottish Border.

27 August 1997: New in Swashbucklers & Fops: Rapier & Dagger provides access to primary texts on fencing from the sixteenth to the nineteenth century. 24 August 1997: A new section, Erin & Alba, explores the history and mythology of the Gaelic-speaking lands of Ireland, Scotland, and Man. 16 August 1997: New in King Arthur & and the Matter of Britain: The Welsh Bards links to the Mabinogion and the tales of Taliesin and Aneirin, with sources for the Welsh language and medieval Wales. 15 August 1997: New in Ballads & Broadsides: Shake Loose the Borders explores the lore and history of the English/Scottish border, from George Macdonald Fraser to Dorothy Dunnett to Sir Walter Scott. 10 August 1997: New in Ballads & Broadsides: True Thomas, our page on Thomas of Erceldoune, better known as Thomas the Rhymer. 31 July 1997: New in Swashbucklers & Fops: Swordplay features an appreciation of William Hobbs, fight arranger for such films as The Four Musketeers, Robin and Marian, and Rob Roy. 29 July 1997: Legends is born. Everything is new.